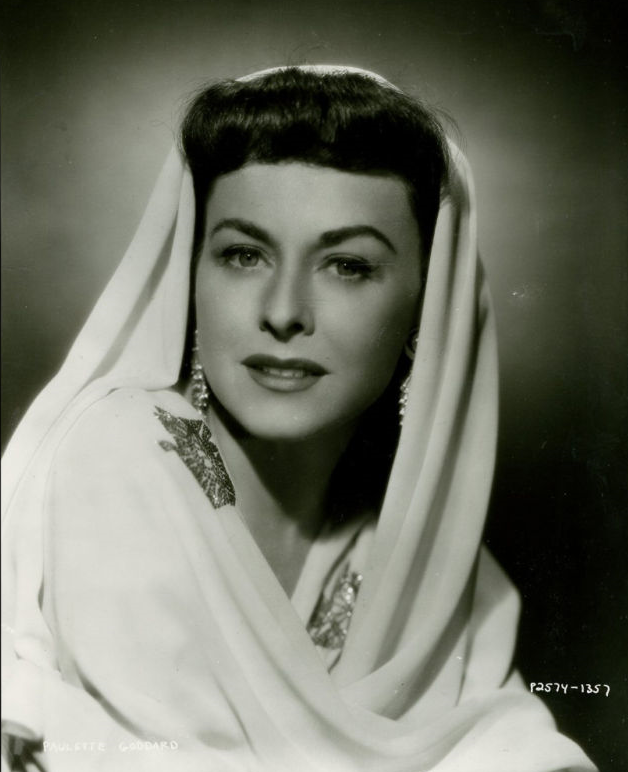 In the opening credits of The Women (1939), the stars of the all-female cast are introduced with various members of the animal kingdom representing their respective characters. As the sly golddigger, Miriam Aarons, Paulette Goddard is symbolized by a fox. It couldn't have been a more apropos parallel, both for the character and the actress. 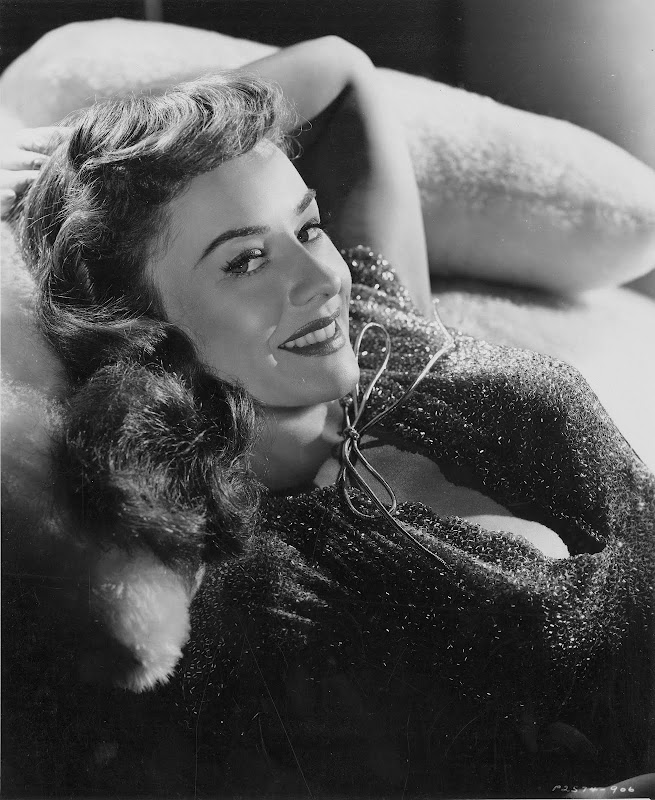 Paulette Goddard was smart, sexy, clever, crafty -- and foxy. She was also a major contract star at Paramount for nearly all of the 1940's, although even at the height of her movie fame, Goddard was perhaps better known (as she is now) for her off-screen exploits, romances and scandals. When, more than 40 years after her greatest stardom, Paulette Goddard left a multi-million dollar estate, including priceless art, fabulous jewels and magnificent properties, it was the culmination of years of not only hard work, but also canny opportunism and a healthy dose of feminine wiles. 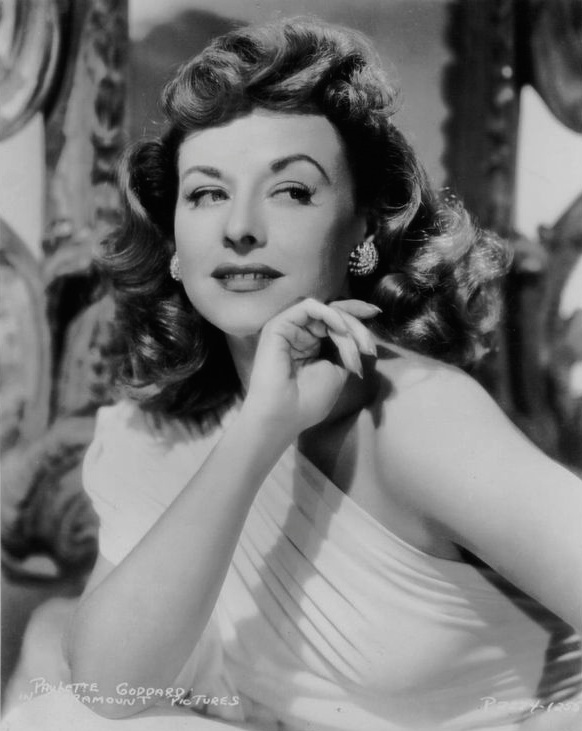 Born Marion Pauline Levy on June 10, 1910, the future Paulette Goddard was extraordinarily beautiful from the start, working as a child model, and becoming a Ziegfeld Girl at the tender age of 13. By 16, she had married a wealthy New York businessman, shedding him a few years later for a substantial cash settlement, which Goddard used to subsidize her move to Hollywood with her mother. 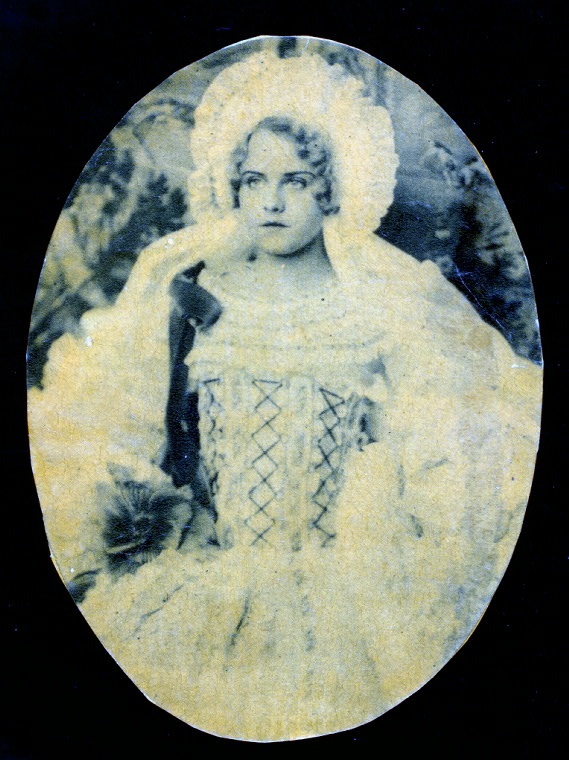 Paulette Goddard in the Ziegfeld Follies production of Rio Rita (1927)
Along with other future luminaries Lucille Ball, Betty Grable and Ann Sothern, the newly minted starlet became a "Goldwyn Girl," appearing in such Sam Goldwyn productions as Roman Scandals (1933) and Kid Millions (1934). It was during this period that Goddard met Charlie Chaplin, and the two began a romance which would both help and hinder Goddard's ambitions for stardom. 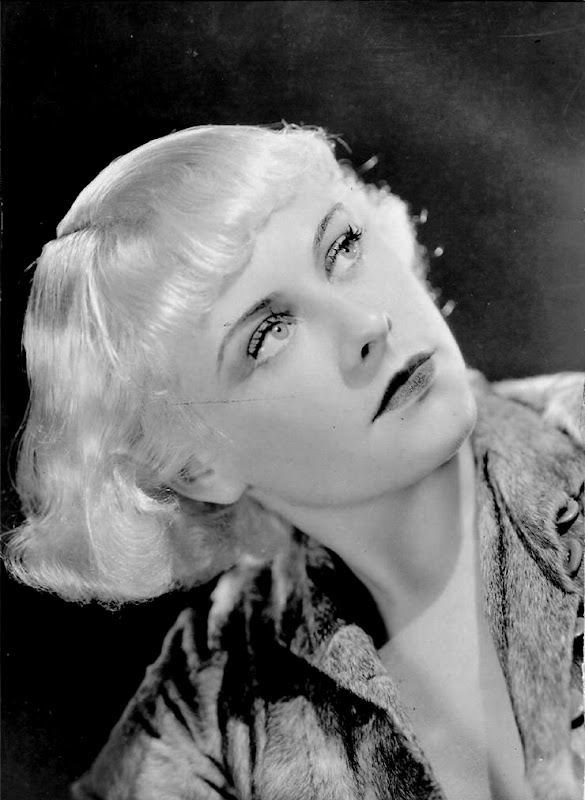 Paulette Goddard as a Goldwyn Girl, circa 1933
Claiming to have been married in China, Chaplin and Goddard brazenly lived together in his Beverly Hills mansion, shocking the public and raising the eyebrows of even decadent Hollywoodites. By refusing to comment on the matter publicly, the couple stoked the fires of speculation -- all good for publicity and name value, in Goddard's case, but not beneficial for her reputation in the long run. 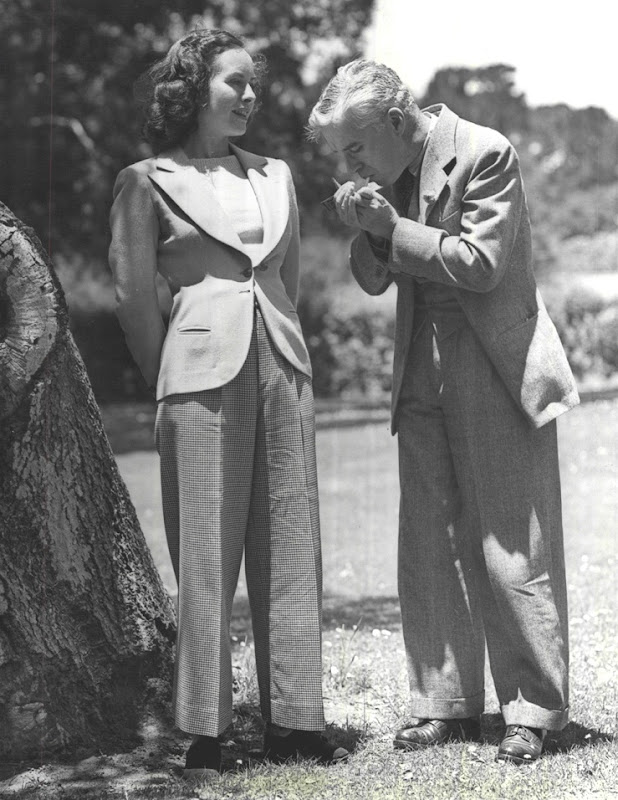 Husband and wife? Paulette Goddard and Charlie Chaplin, 1938
After her acclaimed appearance in Chaplin's Modern Times (1936), Goddard's career stalled -- Chaplin planned future projects for his was-she-or-wasn't-she-wife, but these never came to fruition. Frustrated, Goddard signed a contract with producer David O. Selznick, appearing first in The Young in Heart (1938), third-billed above the title with Janet Gaynor and Douglas Fairbanks, Jr. 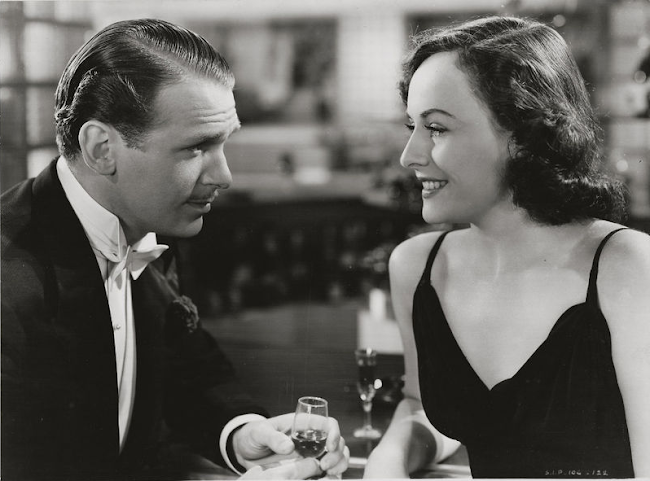 Douglas Fairbanks, Jr. and Paulette Goddard in The Young in Heart (1938, United Artists)
Selznick then loaned Goddard out to MGM for their all-star production of Clare Boothe Luce's cat-fest, The Women (1939). In her flashy role as a street-smart showgirl who marries into high society, Goddard was in her element, and more than held her own against the likes of Norma Shearer, Joan Crawford and Rosalind Russell, having a memorable on-screen brawl with the latter. 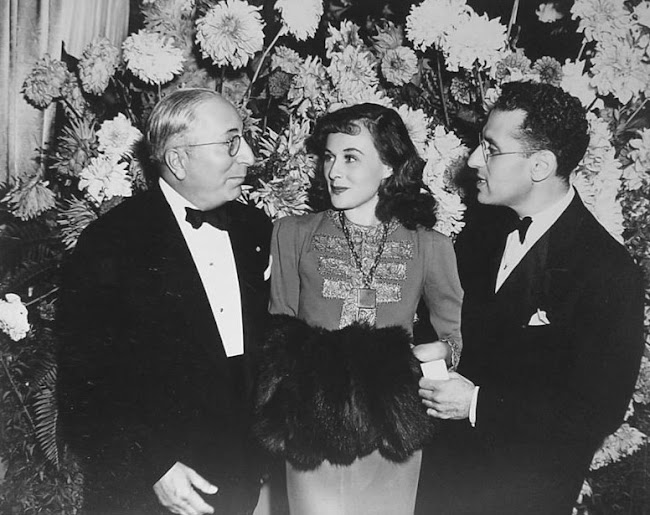 Louis B. Mayer, Paulette Goddard and George Cukor at the premiere of The Women (1939, MGM)
It was a reunion of sorts for Goddard and director George Cukor; she had been David O. Selznick's front-runner choice for the hotly coveted role of Scarlett O'Hara in his production of Gone with the Wind. Cukor was the initial director on the project, and it was he who guided Goddard through her series of screen tests, including the only Technicolor screen test given to any of the multitude of potential Scarletts; many considered her a shoe-in. What may have ultimately cost Goddard the part, however, was the stigma of scandal which still clung to her unorthodox relationship with Chaplin; Selznick, in spite of his friendship with the couple, delayed in officially offering Goddard the role of Scarlett because of his concerns about the public's response to her private life. In the interim, the relatively unknown British actress Vivien Leigh arrived in Hollywood, determined to throw her hat into the ring. The die was cast. Selznick had found his perfect Scarlett, and it wasn't Paulette Goddard. 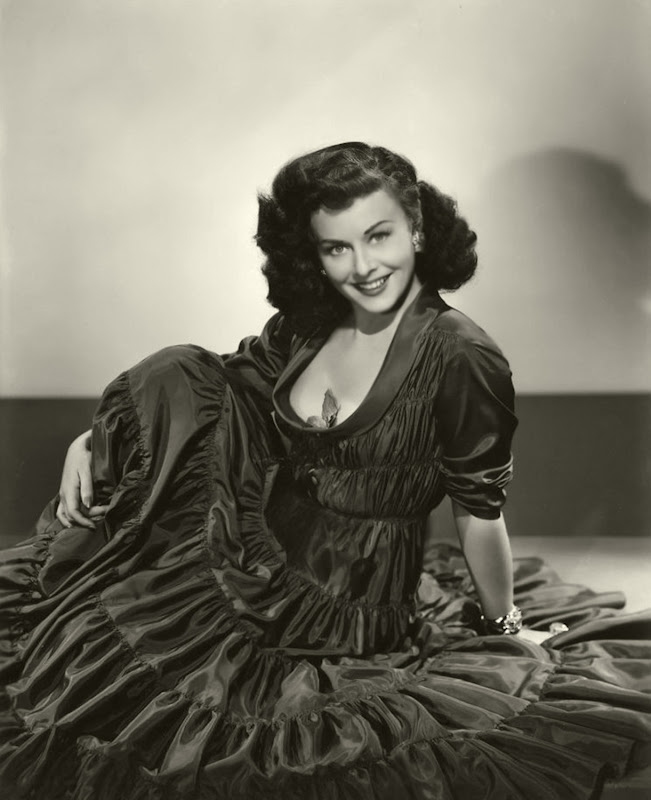 However, all of the publicity surrounding Gone with the Wind, combined with her strong showing in The Women, did result in a surge of interest in Goddard's career. She signed directly with Paramount, and was teamed with comedian Bob Hope in the hit comic thriller, The Cat and the Canary (1939). It signaled the beginning of major stardom for both players, and they were paired in two further films, The Ghost Breakers (1940) and Nothing But the Truth (1941). 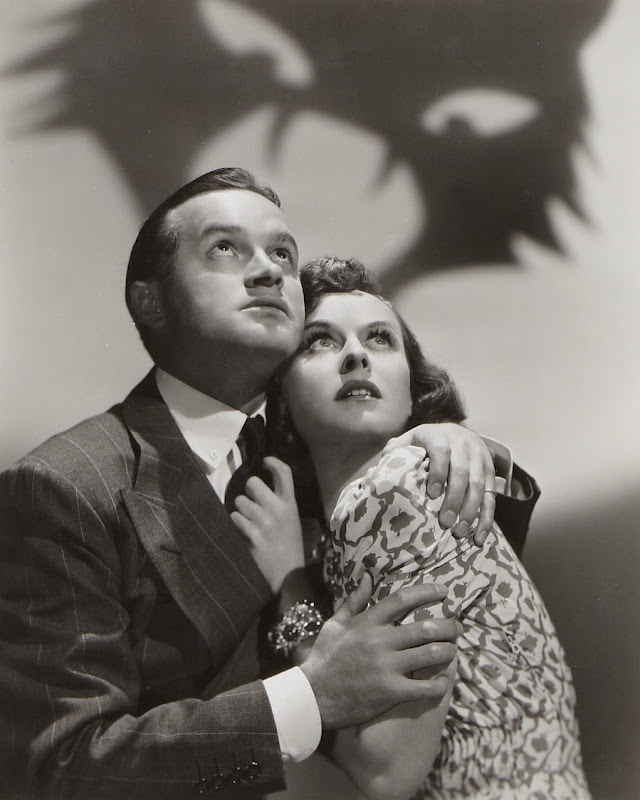 Bob Hope and Paulette Goddard in The Cat and the Canary (1939, Paramount)
1940 was truly a banner year for Goddard, as she appeared with Chaplin once again in The Great Dictator, acquitted herself respectably alongside Fred Astaire in Second Chorus, and appeared in the first of three epic films she would make for Cecil B. DeMille, North West Mounted Police. But as her popularity and profile soared, Goddard continued to court scandal. Even as questions still lingered about her "marriage," she carried on torrid romances with the likes of composer George Gershwin, writer H.G. Wells and director Anatole Litvak. The latter was dining with Goddard at Ciro's in Hollywood when her diamond shoulder strap fell off and under the table. Litvak went down to retrieve it, and by the next morning, tongues were wagging across town that Litvak had been performing oral sex on Goddard at Ciro's. The story was repeated so often, embellished each time, that it would dog Goddard for the rest of her life, and derailed Litvak's career for several years. 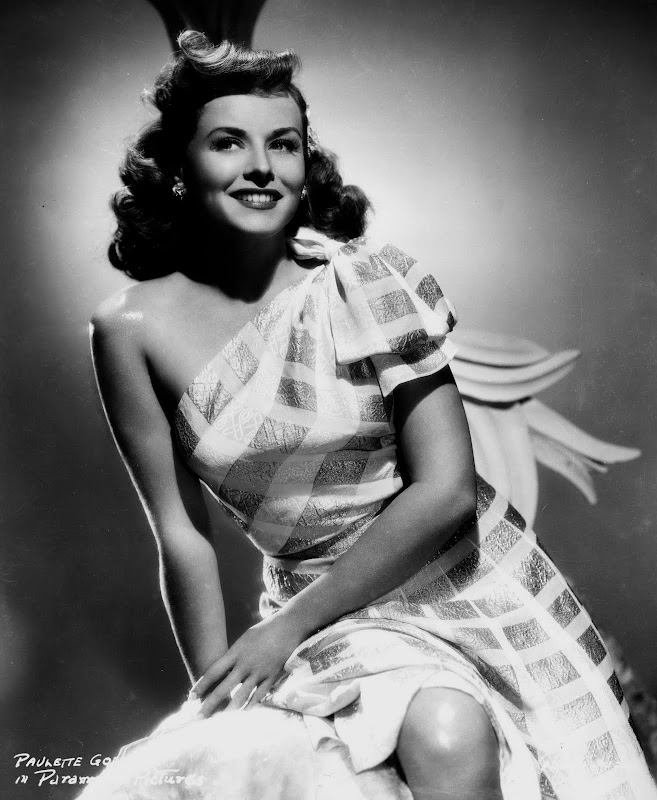 There were whispers of Goddard's dalliances with women, as well. She reportedly had an affiar with the Mexican painter, Frida Kahlo ("If only one of them had been blonde," mused Salvador Dali, "they'd have made a perfectly beautiful couple!"); and in the late 1940's, Goddard's close friendship with actress Evelyn Keyes (who, ironically, had played Scarlett O'Hara's sister Suellen in Gone with the Wind) gave gossip-mongers something to talk about, especially when Goddard briefly moved into the home Keyes was sharing with then-boyfriend Peter Lawford, prompting rumors of a ménage à trois. As David Selznick's chief of publicity, Russell Birdwell, had warned years earlier, when considering Goddard for Gone with the Wind: "I have never known a woman, intent on a career dependent upon her popularity with the masses, to hold and live such an insane and absurd attitude towards the press and her fellow man as does Paulette Goddard." 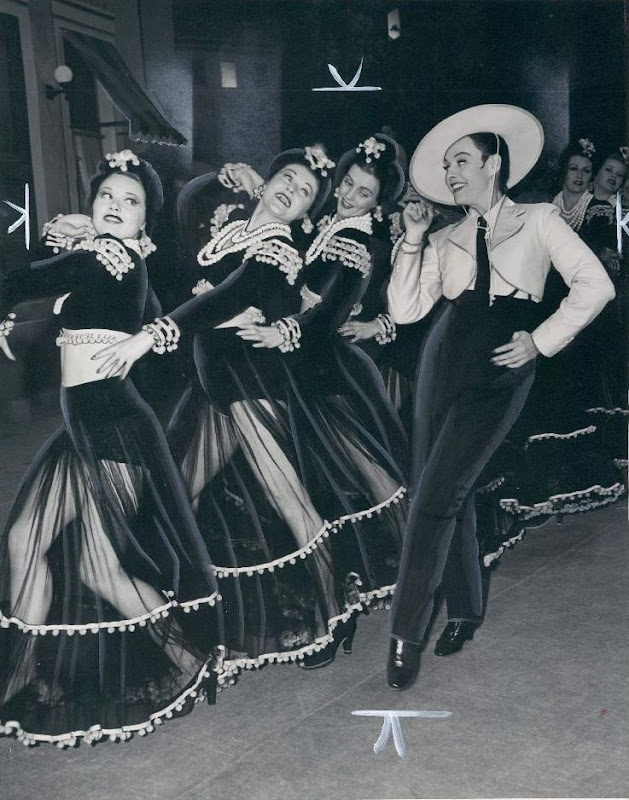 A way with the ladies: Paulette Goddard as a cross-dressing caballero in Pot o' Gold (1941, United Artists)
Living well is the best revenge, though, and if some quarters clucked in disapproval, Goddard probably just laughed and eyed the growing collection of jewelry lavished upon her by smitten admirers; one of her most infamous pieces was a dazzling diamond necklace comprised of 570 stones, made possible, she said, by keeping all of her engagement rings. And, for a while, Goddard's star continued to rise. She obtained a Mexican divorce from Chaplin in 1942, the same year that she starred in her second DeMille epic, Reap the Wild Wind, in which she portrayed a very Scarlett O'Hara-esque Southern belle. Continuing her hot streak, Goddard was nominated for a Best Supporting Actress Oscar for her role in So Proudly We Hail (1943), and two years later, had her career peak with the lavish star vehicle, Kitty (1945). 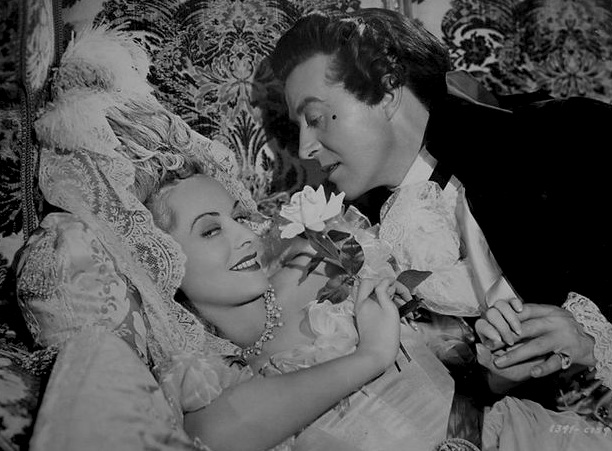 Paulette Goddard and Ray Milland in Kitty (1945, Paramount)
It was the beginning of the end, however. Her next film, Diary of a Chambermaid (1946), was an expensive failure largely viewed as a vanity project, filmed under the newly-formed production company Goddard had launched with her third husband, actor Burgess Meredith. Goddard's capricious nature and temperamental behavior, though, were what finally spelled the end to her movie stardom: co-workers and directors certainly didn't hold her in affectionate regard (even the famously diplomatic Edith Head recalled Goddard as one of only a handful of actresses she disliked), and when her career fortunes began to slide, not many were willing to step in to help. 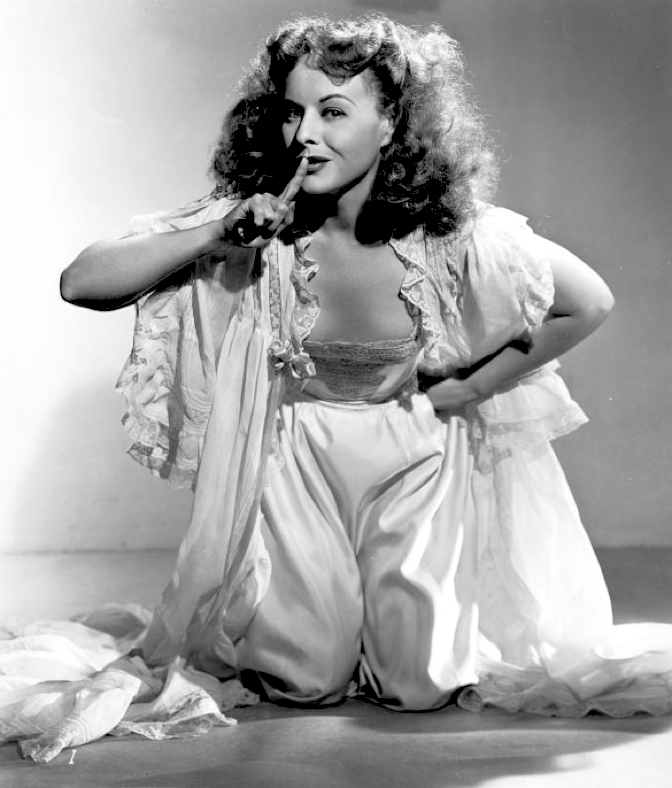 Diary of a Chambermaid (1946, United Artists)
For instance, Goddard clashed badly with Cecil B. DeMille during the filming of their third picture together, Unconquered (1947), walking off the set and requiring the use of her stand-in for certain scenes. She never worked with the legendary director again, and when DeMille was casting The Greatest Show on Earth (1952), at a time when Goddard was desperately in need of a hit, she begged for the role ultimately played by Gloria Grahame. He refused. 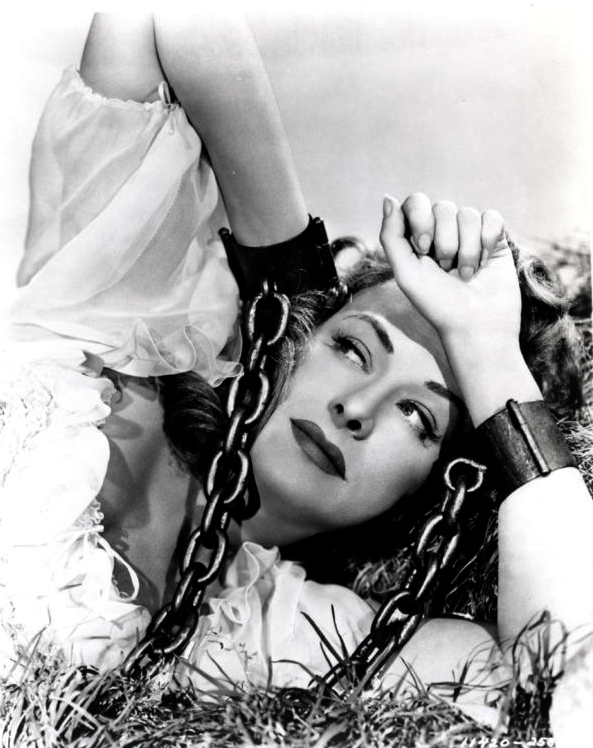 Unconquered (1947, Paramount)
Two more disastrous vanity projects finished off Goddard's career as a major star. In Bride of Vengeance (1949), she played a heavily fictionalized Lucretia Borgia while decked out in some strange makeup and hairstyle choices; her longtime cosmetician tried to dissuade her, which only resulted in their dismissal. The film was crucified by the critics, with many commenting unfavorably about Goddard's appearance. Its follow up, Anna Lucasta (1949), cast Goddard as a wanton floozy surrounded by even more sordid characters; the general consensus was that the germ of a good idea was lost amid heavy-handed direction and overheated acting. 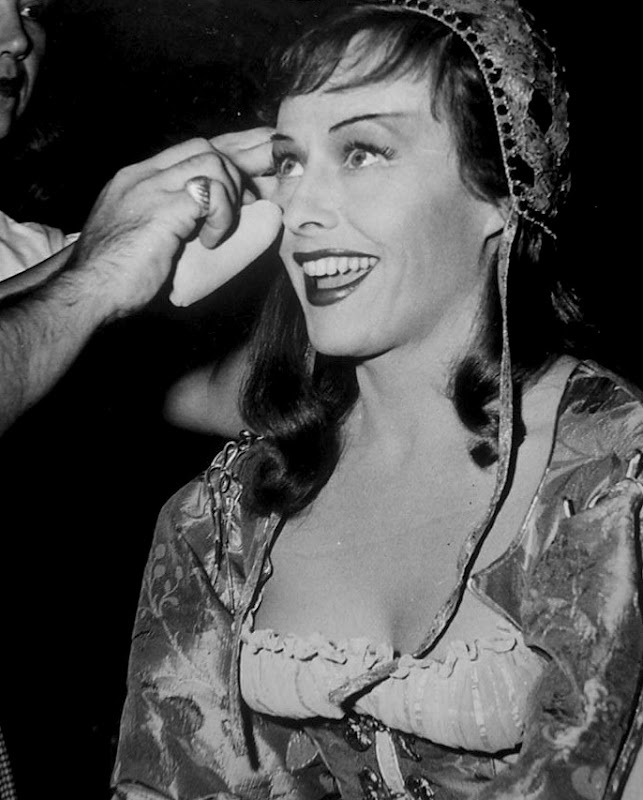 The infamous makeup job on the set of Bride of Vengeance (1949, Paramount)
Practically overnight, Goddard slipped from studio contract star to making cheapies like the infamous Babes from Bagdad (1952) and Sins of Jezebel (1953), the titles of which pretty much say it all. She turned to summer stock and television, and was reputedly down to her jewels and a few hundred dollars in cash when she married husband number four, author Erich Maria Remarque, in 1958. Goddard was now able to indulge fully in the life of a wealthy socialite, amassing a remarkable collection of art with her husband as they divided their time between Europe and New York. 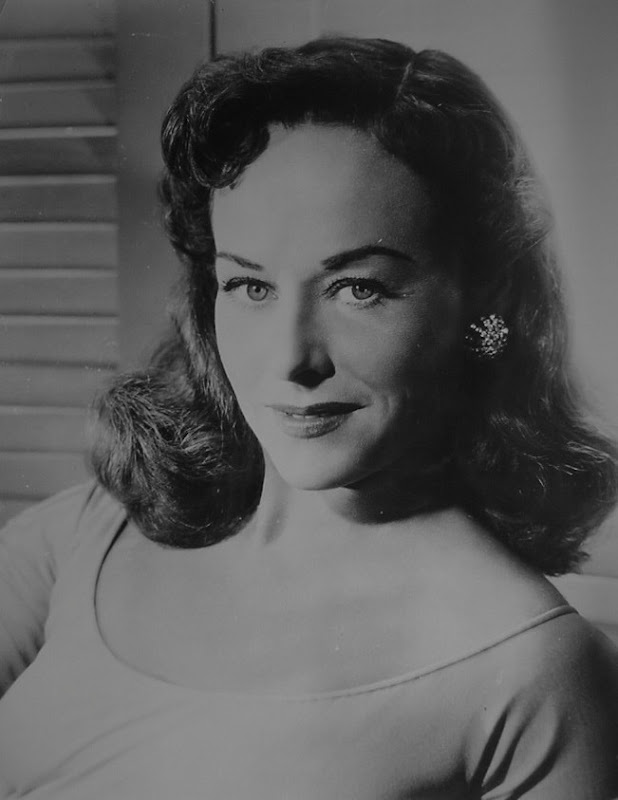 Paulette Goddard, circa 1954
During her final marriage, Goddard only made one minor film; after Remarque's death in 1970, she made one last television appearance on an episode of The Snoop Sisters (1972), a 90 minute mystery-comedy series starring Helen Hayes and Mildred Natwick. She continued to make the rounds of New York society, still svelte, beautiful and bejeweled, often in the unlikely company of Andy Warhol. But age and illness were taking their toll, and Goddard, who had always been known for her prickly personality, was beginning to exhibit bizarre, sometimes outlandishly cruel behavior. 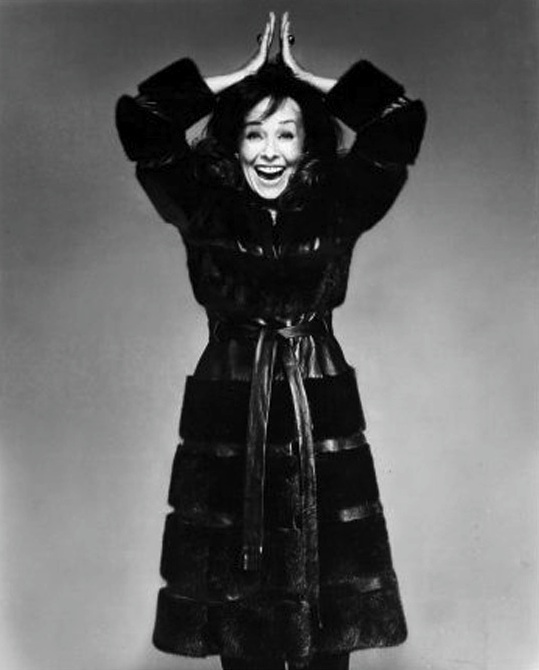 Richard Avedon photo used for Blackglama's What Becomes a Legend Most? campaign, 1971
In 1975, amid great secrecy, Goddard had a radical mastectomy; for a woman who had spent nearly her entire life parlaying her good looks into material wealth, the after effects were devastating: physical deterioration, depression and a series of suicide attempts. Goddard retreated to her lakeside Swiss villa, where she finally died of heart failure in 1990. 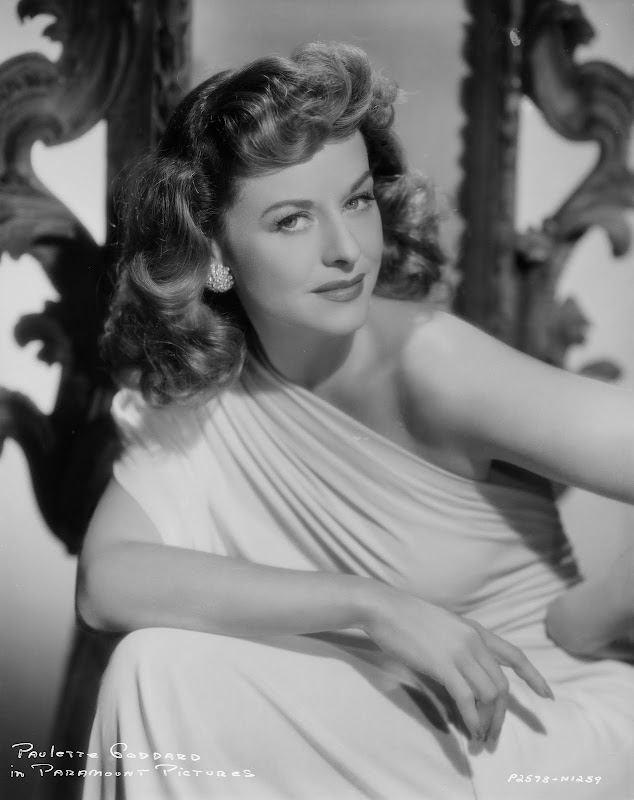 Had she played by the rules, Paulette Goddard may have become a more enduring name in Hollywood, with a career that could have lasted far beyond the 10 year span of her greatest success. Certainly, she had the sparkle, talent and looks to become a superstar. But instead of international headlines and grief-stricken fans, upon her death the only mourners at her sparsely-attended funeral were her immediate household staff. In the end, the spirited, defiant, unapologetic Goddard probably wouldn't have cared. As her longtime housekeeper later reflected, “She always told me that she had three husbands and several fiances waiting for her in heaven.” 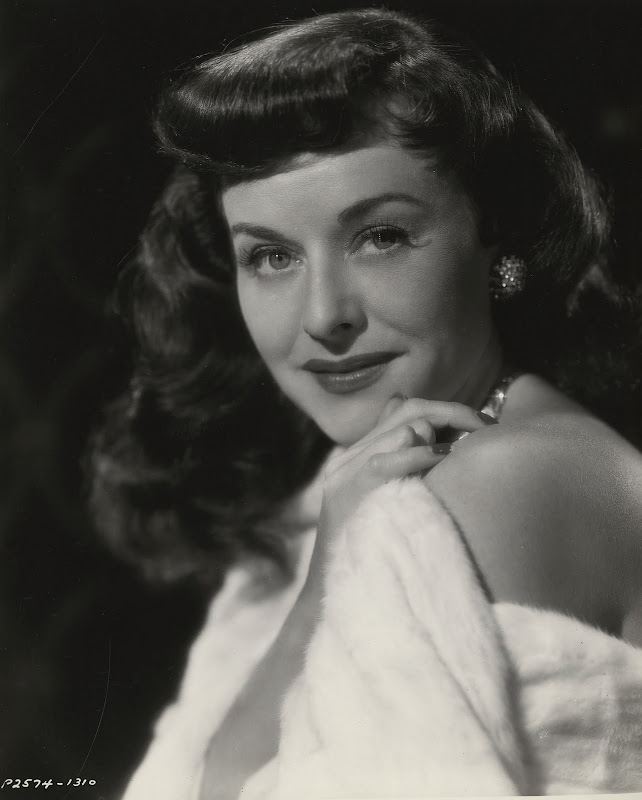 * For more on Paulette Goddard's later years, please visit our friend Brooks Peters at An Open Book
Posted by TJB at 12:00 AM