On Wednesday evening, I attended Marilyn Maye's closing night at Chelsea's marvelous Metropolitan Room cabaret. As has become custom, it was a complete sell-out crowd, and Ms. Maye had 'em eating out of her hand from her first, throaty note. It was undeniable that her voice was a bit more ragged than when I saw her on Sunday, but she still had power, nuance and clarity--and sounded damn terrific for someone who'd been performing a high-octane, 90 minute show nightly for over a week. It's all the more remarkable that this feisty lady just turned 80--yes, Eight Oh. And she's still high-kicking up a storm during her raucous "It's Today" encore, and belting out showstopping notes galore.


The Grand Dame of New York Cabaret, Miss Julie Wilson, was also in the audience that evening, and very vocally made her approval of Ms. Maye's talents known throughout the show. The always-chic Wilson looked splendid, and she opened her own show at The Metropolitan last night, which I'm anxious to see; I was an instant Wilson fan from the moment I first saw her at The Alogonquin nearly 10 years ago. Julie Wilson is truly the consummate cabaret performer, so the highlight of Sunday's show was studying this great artist intensely watch another artist (Marilyn Maye) sing and act her way through the highly-emotive "Guess Who I Saw Today."


That tale of an outwardly placid suburban housewife seething with contained rage over her husband's infidelity was one of the very few downbeat moments in a show otherwise dedicated to "party"-themed material, and a sneak preview of Maye's upcoming fall program of torch songs. "This is a happy show, but in September, it's gonna be a real downer," Maye joked. Judging from her own hearty good humor, and the rapt attention her worshipful audience's paid to every note, feeling blue will never have felt so good. Until then, enjoy this highlight from Maye's only live album, from 1965 (The Second of Maye, recorded at the Living Room nightclub). http://www.box.net/shared/1qwzpme8gw
Posted by TJB at 6:21 PM 2 comments:

Random food thought of the day: I never dreamed that I would ever eat liverwurst, much less consider it life-changing, until it was offered as gratis, compliments of the management of The Modern Bar Room (pictured at left, courtesy of http://www.flickr.com/photos/hellokitty893112/). From that evening forward, I've been addicted.Trust me, it's absolutely divine, as is the Bar Room's braised pork belly. As is their grilled quail. As is their wild mushroom soup. As is Gabriel, their charming, blond, handsome host...
Anyway, back to that liverwurst: it's incredibly velvety-smooth, served with pickled vegetables, country mustard, and toasted brown bread; it's rustic and sophisticated at the same time, almost as if foie gras were doing business casual. There have been evenings when one of The Modern's perfectly mixed Beefeater martinis, followed by a plate of that liverwurst, were all that kept me on the cheerier side of manic. Try it. You'll like it.
Posted by TJB at 7:17 AM No comments:

Email ThisBlogThis!Share to TwitterShare to FacebookShare to Pinterest
Labels: food 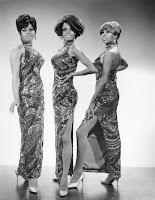 Beyonce, Anika and Jennifer...eat your hearts out.
Posted by TJB at 1:29 AM No comments:

I found this postcard on eBay, while doing a search on the long-gone L'Aiglon restaurant in New York City. As you can see, it favored the typical luxe flourishes of the day: lots of red, lots of curved banquettes. I picture lots of glamorous women who look like Dorian Leigh and Dovima lunching here in hats, with handsome smoothies wearing custom-tailored suits, Patek Philippe watches and tie clips. L'Aiglon just reeks of a bygone era we'll probably never recapture. Even though I never was there, I miss it terribly.
Posted by TJB at 12:49 AM 2 comments: 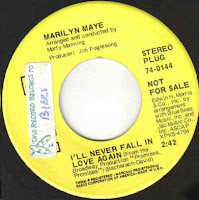 The indomitable Marilyn Maye released a string of entertaining albums for RCA in the mid-to-late 1960's, but very little of her recorded material even hinted at this lady's tremendous talent--blame the A&R department, blame the rise of acid rock; but be very grateful that Marilyn Maye is STILL singing, performing incredible, sold-out cabaret shows, and now interpreting the superb material that she wants to do.
On Sunday, April 13, I had the pleasure of seeing Ms. Maye at New York's fabulous Metropolitan Room. She knocked 'em dead--and I got to sit two seats away from another one of my idols, Lesley Gore, Miss Sunshine, Lollipops and Rainbows herself. The title of Marilyn's current show is "It's My Party--And I'll Sing 'Cause I Want To" (a nod to La Gore's classic pop hit), and the program consisted of such feel-good material as "Walking Happy," "Let the Good Times Roll," "Don't Bring Me No Bad News," and, of course, Maye's signature closing tune, "It's Today" from Mame.
To say that Marilyn Maye brought the house down would be a vast understatement. The entire room was in her thrall from start to finish, and the applause after each number was deafening. One personal highlight was her inclusion of the obscure Broadway tune, "Celebration," from the equally obscure show of the same name. It appeared as the B-side to Marilyn's 1969 cover of "I'll Never Fall in Love Again," from the Bacharach/David show Promises, Promises, and is a quintessential slice of inconsquential yet irresistible show tune schlock. And, in the hands and vocal cords of a consummate pro like Marilyn Maye, it sounds one hundred times better than it is. Listen to Maye's lovely 1969 recording here: http://www.box.net/shared/92aa2ten4c, but rest assured: it was even better, more urgent, and more knock-your-socks-off terrific in 2008. She's at the Metropolitan Room through Wednesday, the 16th--catch her while you can. I already have my reservations for her closing night.
Posted by TJB at 7:26 PM 7 comments: