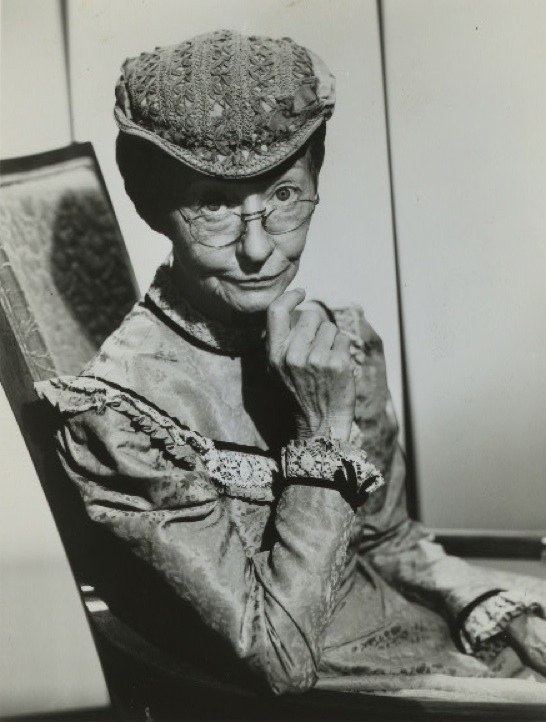 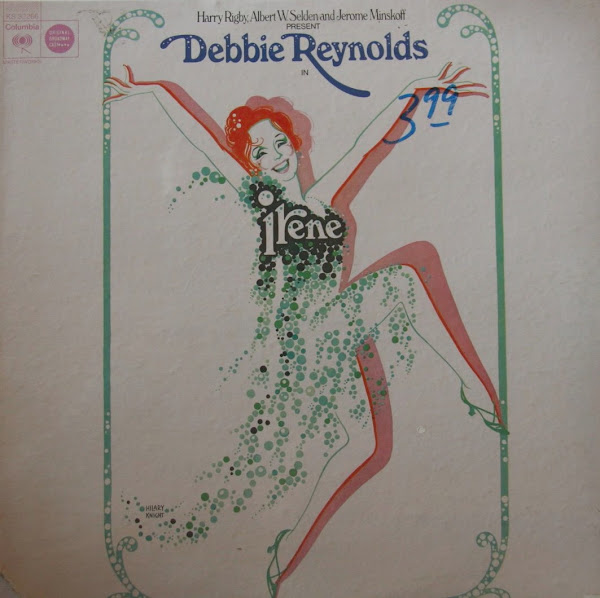 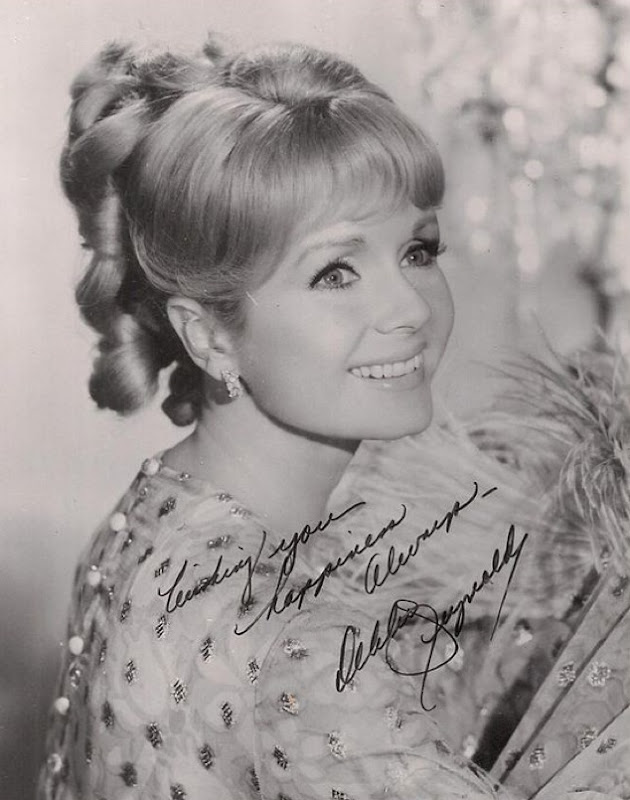 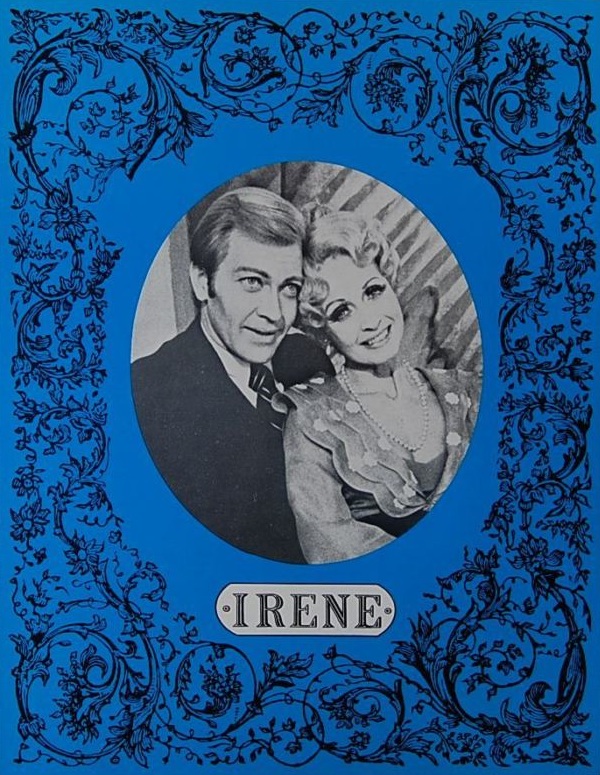 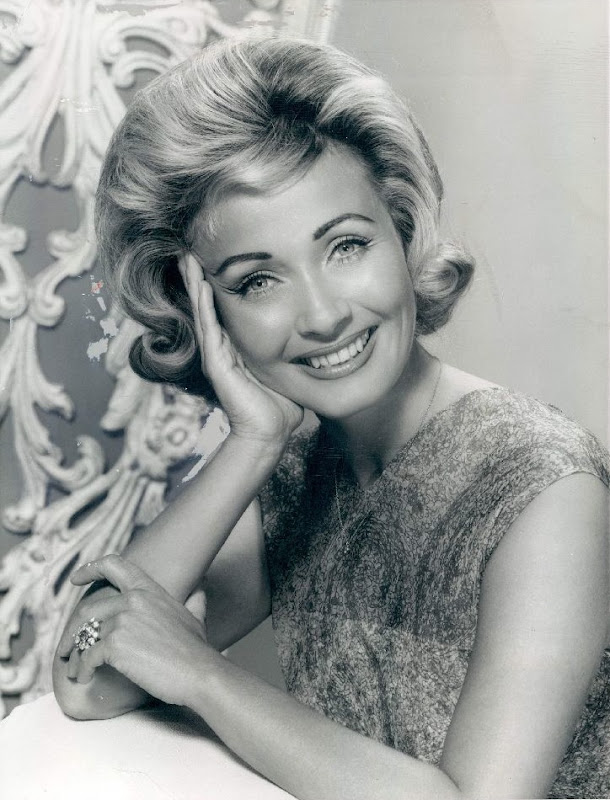 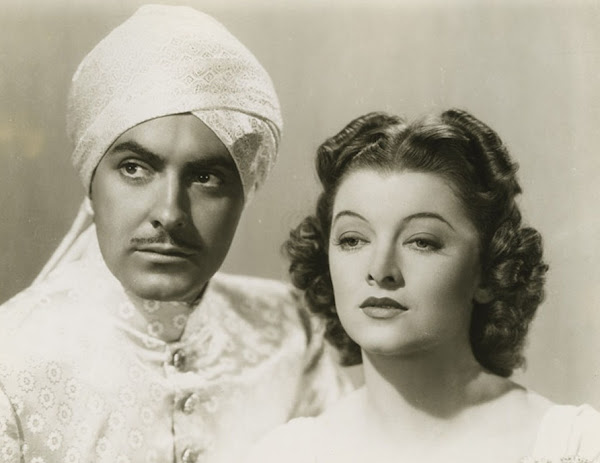 In the event of a torrential downpour, head for higher ground, maintain calm, and always use water-proof tropical makeup.
Posted by TJB at 2:00 PM 3 comments: 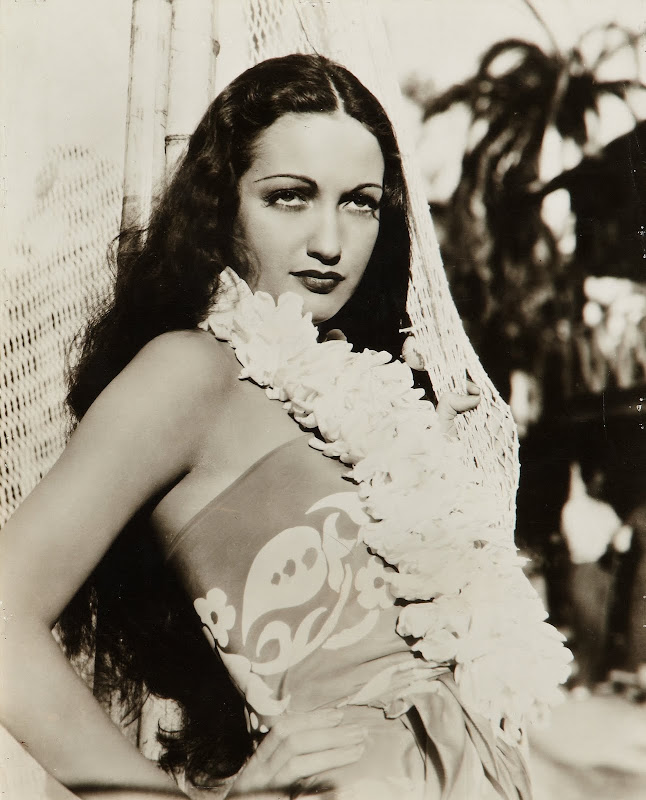 Dorothy Lamour in The Hurricane (1937, Paramount)

Bottled water, batteries, non-perishable food, and the most important of all... a sarong.
Posted by TJB at 2:00 PM 2 comments: 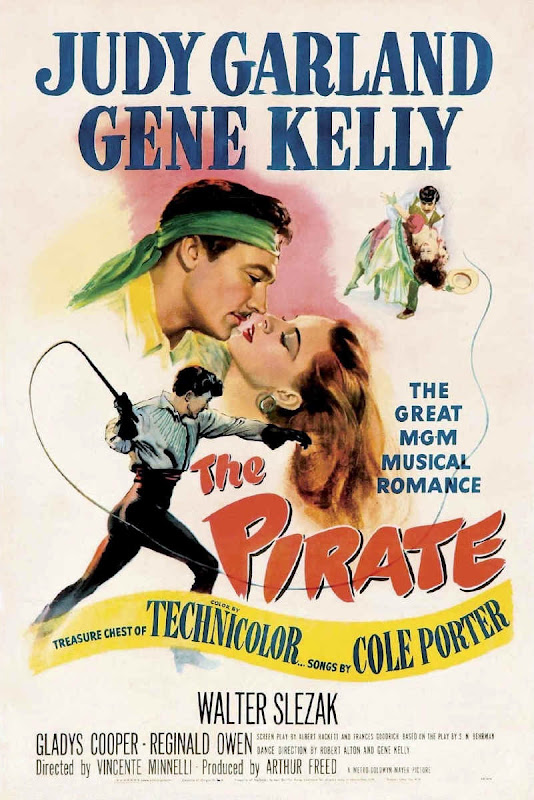 Upon its initial release, The Pirate (1948) divided critics, alienated most audiences, lost money, and became a project that all involved -- stars Judy Garland and Gene Kelly, director Vincente Minnelli, and composer Cole Porter -- preferred to forget. Porter, in fact, decried the fantastical mistaken identity farce as "unspeakably wretched, the worst that money could buy." Today, half a century later, it's still often described as the most controversial film in the Garland canon. 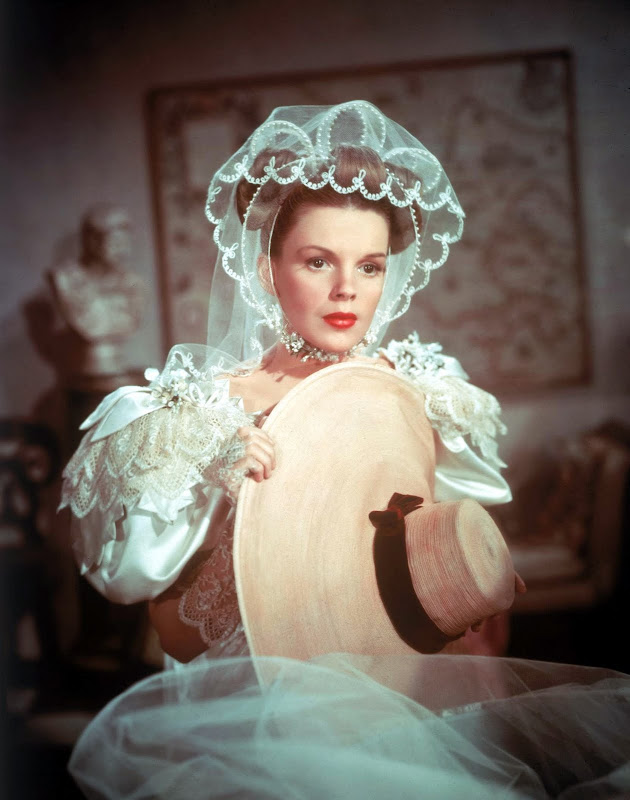 Judy Garland as Manuela in The Pirate (1948, MGM)
The fact that Garland missed 99 of the 135 days of shooting speaks to her deteriorating mental and physical state, and undoubtedly contributed to the film's uneven, awkward pacing; she was reportedly smoking four packs of cigarettes a day, and hallucinating from her drug use -- sometimes requiring the crew to literally carry her off the set in hysterics. As a vehicle for Metro's brightest musical talent, The Pirate fails miserably -- although its top-billed star looks splendid and displays a wry comedic touch, her dazzling singing talents are barely tapped. Garland's two ballads, "You Can Do No Wrong" and "Love of My Life," are pleasant, but not up to her usual high standard -- in fact, the latter song is only seen as a reprise in the final act of the film; its full rendition was deemed unworthy and was cut. 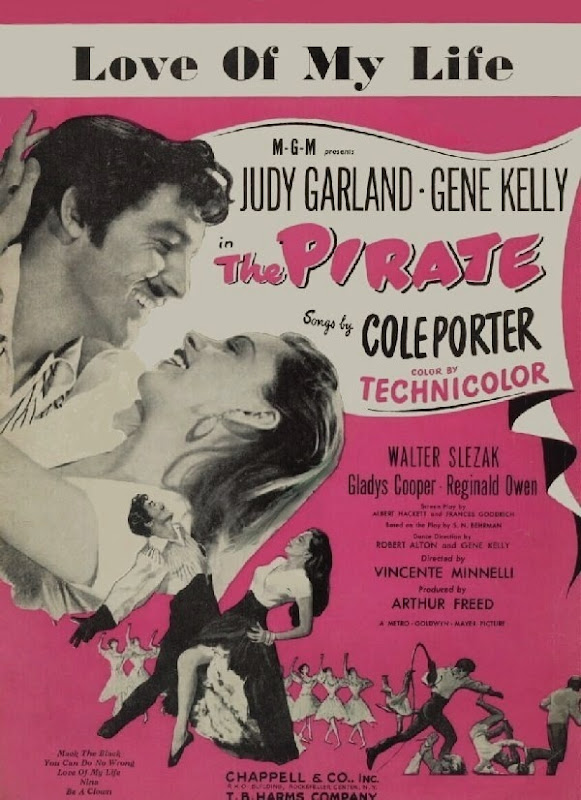 As a potential stepping stone in the possibility of Garland and co-star Gene Kelly becoming another Judy-and-Mickey box office super-duo (they had been successfully paired in 1942's For Me and My Gal), the film barely passes muster: their undeniable chemistry is undercut by a screenplay (and subsequent editing) which has the two go from adversaries to eternal lovebirds in a matter of seconds. But as a showcase for Gene Kelly's white-hot sex appeal, The Pirate has no equal. 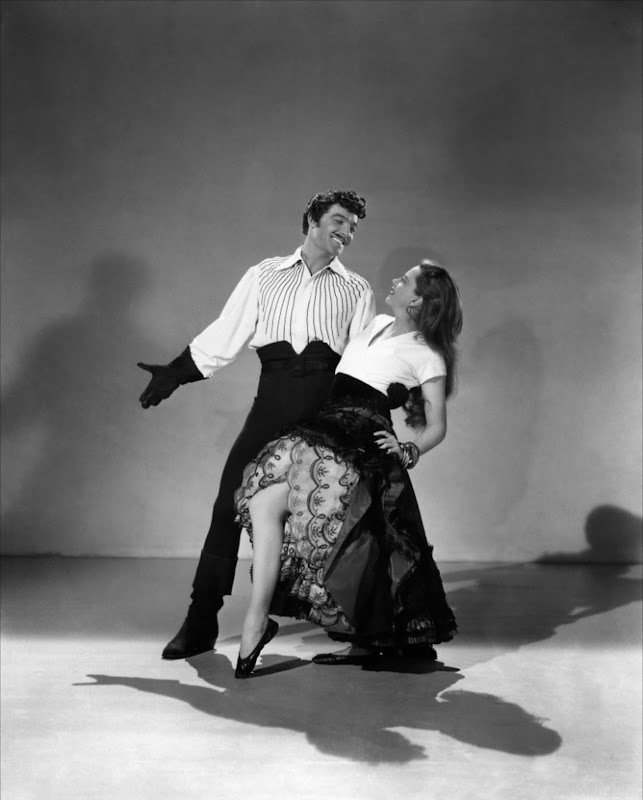 In spite of his physical handsomeness, athletic dancing ability, and easy charm, Gene Kelly's screen persona was, and is, curiously asexual. As gorgeous and talented as he is in On the Town (1949), An American in Paris (1951), or Singin' in the Rain (1952), Kelly's glib style and mannered acting don't incite audiences to swoonful passion. But in The Pirate, Kelly's dancing was never more erotic or (literally) in-your-face: his first solo, "Nina," finds him introducing male pole dancing (take that, Steven Retchless!); being memorably kinky with a cigarette (fast forward to 3:19 in the clip below); and effortlessly getting the entire female population of the Caribbean to fall at his feet -- and we don't blame them.

Even more eye-popping and jaw-dropping is The Pirate's ballet sequence, in which a tanned, taut, toned Kelly cavorts in what can only be described as hot pants and an arm band, leaping amidst licking flames and a scarlet background. Frankly, it reminds us of a mash-up between the infamous Querelle (1982) and David "The Construction Worker" Hodo's "I Love You to Death" production number in the Village People epic, Can't Stop the Music (1980). 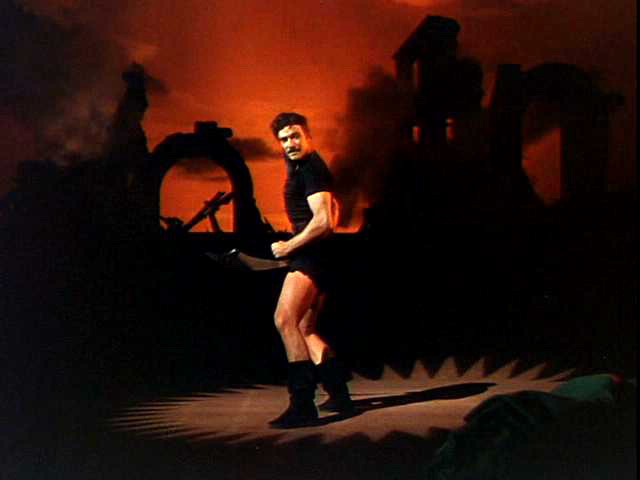 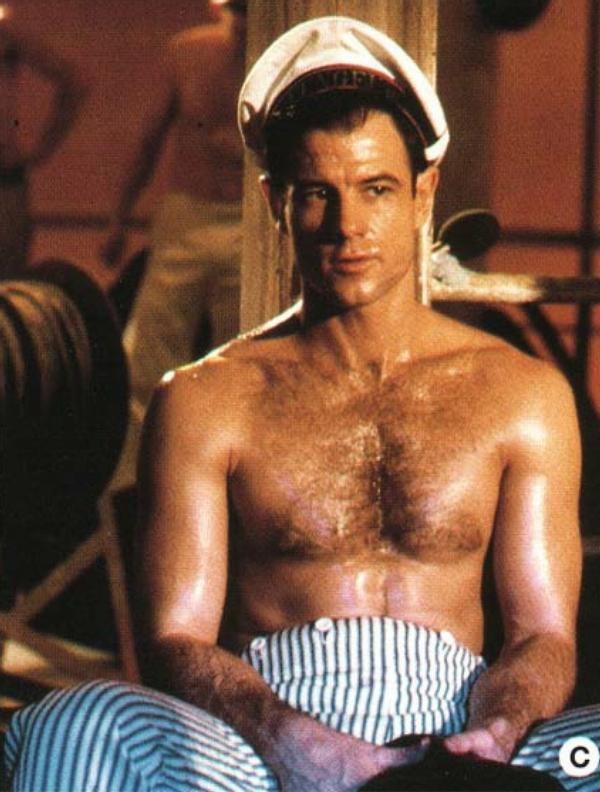 Brad Davis in Querelle (1982, Planet)
David Hodo in Can't Stop the Music (1980, Associated)
Perhaps due to her illnesses and absences, Garland doesn't have very much to do in The Pirate, aside from her wild "Mack the Black," which, if not exactly a high point in her career, is definitely the most uninhibited and sexually-charged production number she ever committed to film. Her acting is also jarring, almost raw and slightly unhinged; yet, at the same time, she's very, very funny, with razor sharp timing and brilliant use of subtle body language -- a raised eyebrow here, a discreet double take there. Indeed, in a movie often called far ahead of its time, MGM-era Judy is foreshadowing loopy, zany, witty 1960's talk show Judy by over a decade. 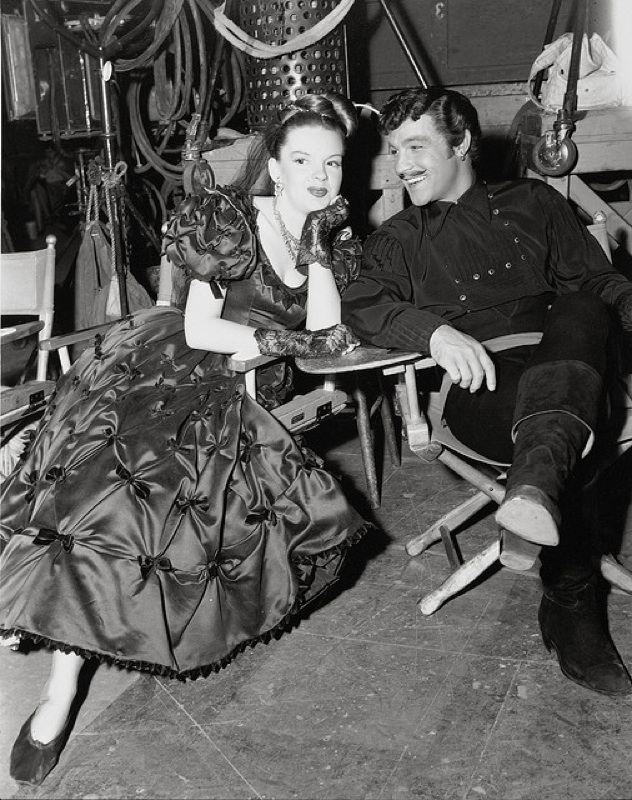 Judy Garland and Gene Kelly behind the scenes of The Pirate, 1948 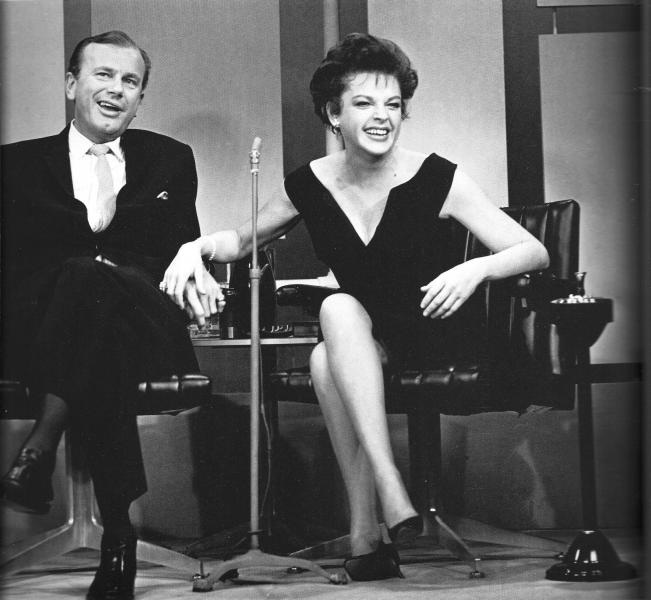 Judy Garland on The Jack Paar Show, 1962
One cause for Garland's concern during the tense filming period was her suspicion that her director (and husband), Vincente Minnelli, was throwing all the good bits to Kelly, collaborating with the brilliant dancer/choreographer on extra bits of business, fleshing out Kelly's role at the expense of Garland's. There may have even been a lingering uneasiness that Minnelli's interest in the virile star wasn't purely professional; and, judging by the lingering eroticism which Minnelli's camera lavishes upon Kelly (akin to the palpable romanticism with which Minnelli framed Garland in Meet Me in St. Louis [1944], their first project together before marrying), Garland couldn't be blamed for feeling put out. 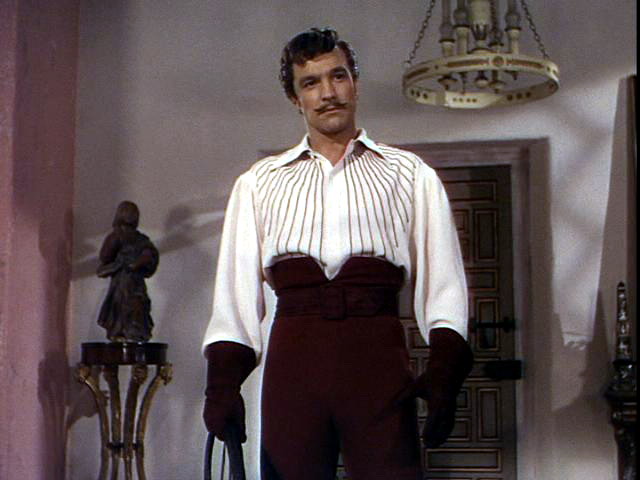 Dashing Gene Kelly as Serafin in The Pirate
Fifty-plus years later, audiences are still scratching their heads over The Pirate, so left-field are Garland and Kelly's characterizations, so stylized is Minnelli's vision. Surely, he intended The Pirate as a spoof? Garland and the other fair maidens of the Caribbean island of Calvados look and sound like well-scrubbed, all American debutantes, dressed for a costume ball in their mantillas and lace. The wonderful Gladys Cooper plays her role of a Spanish aristocrat like a grand dowager of the Main Line. And Kelly's always self-consciously hammy approach is taken to the nth degree, devastatingly sexy on a completely satirical level: he's Gene Kelly imitating John Barrymore imitating Douglas Fairbanks imitating Gene Kelly doing an imitation of John Barrymore imitating Douglas Fairbanks, with a side dollop of Errol Flynn and Gilbert Roland for good measure. 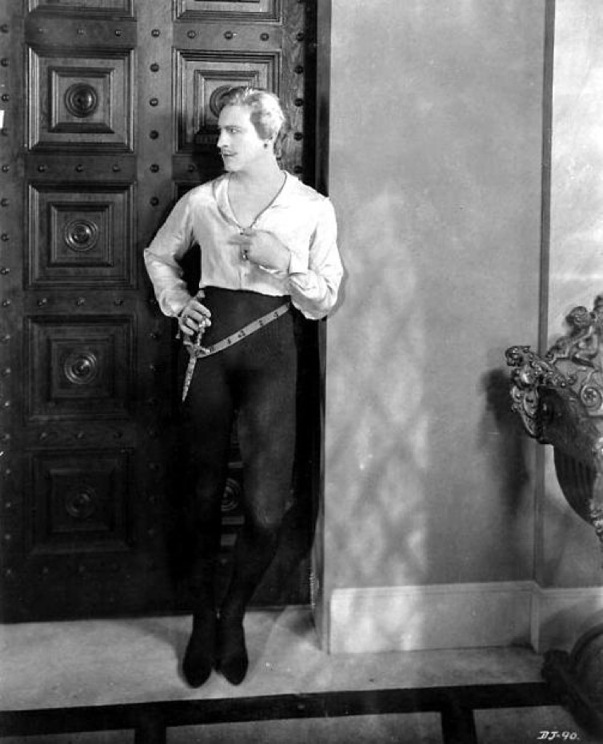 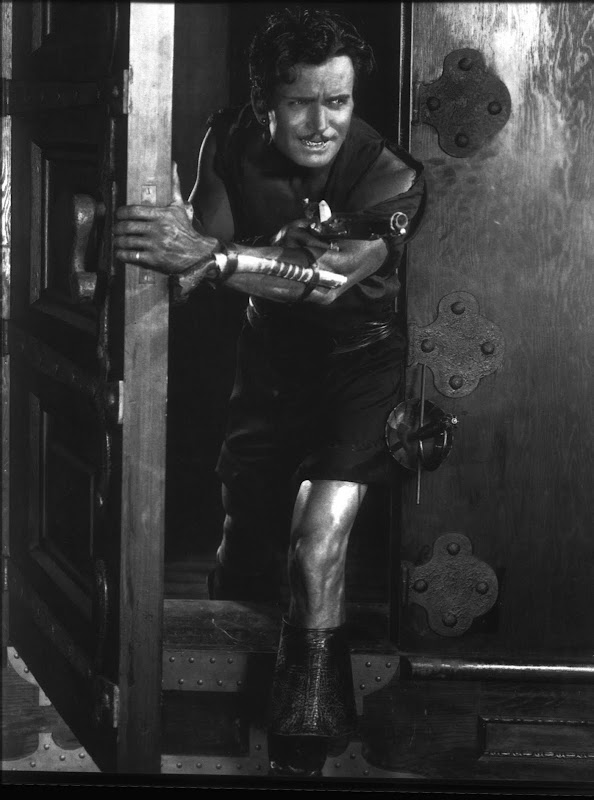 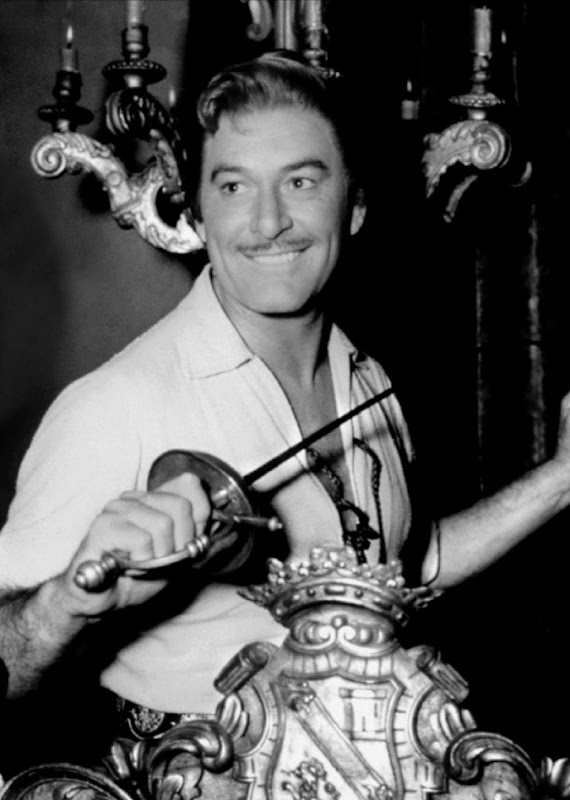 Errol Flynn in The Master of Ballantrae (1953, Warner Bros.) 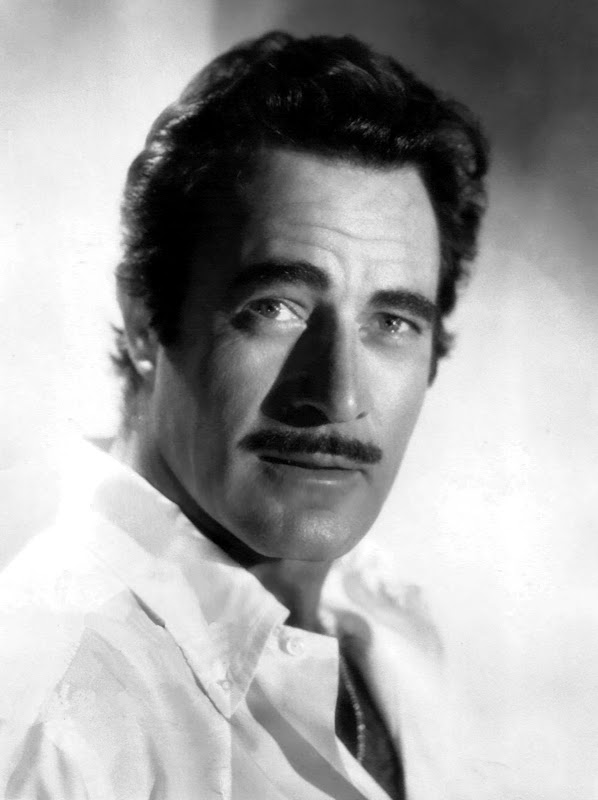 Gilbert Roland, ca. 1940's
So, is The Pirate a great film? Yes and no -- the high points are marvelous, and its flaws are glaringly obvious. As Liza Minnelli, the star and director's daughter, put it so succinctly in a featurette about her parents' grand failure, "There's nothing you can really criticize about the picture -- unless you don't like it!" We like it; and if nothing else, as the only MGM musical to ever get us hot and bothered, it stands alone.