As Time Goes By

There comes a time, particularly for a New Yorker, when one wants and needs a respite from the never-ending onslaught of trendier-than-thou eateries. Deliver us, o Lord, from fusion and microbiology; from self-righteously sustainable this and smugly, locally sourced that; from DJ's and bouncers; and, most especially, from diners taking pictures of their food.

There comes a time when one longs for a grown up meal, served in hushed but welcoming environs, by efficient yet impersonal, professional waiters who don't tell you their names; surrounded by well-dressed, well-mannered adults who most likely have never heard of Facebook or Twitter, much less ever broadcast their dining habits on them.

There comes a time when one yearns to see dishes on a menu which, in 2011 New York, would read like hieroglyphics to most diners if they came across them. Céleri rémoulade. Tripe à la mode de Caen. Floating Island!

Praise be -- this utopia actually exists. 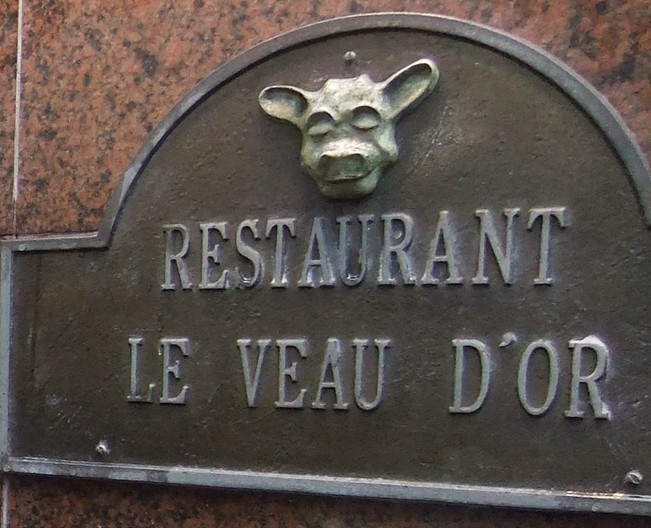 Le Veau d'Or, discreetly tucked away just off the corner of East 60th St. and Lexington Avenue, first opened its doors in 1937; it was already a veteran when, in 1950, the legendary style bible of its day, Flair magazine, included it in their round up of the best Gotham had to offer. 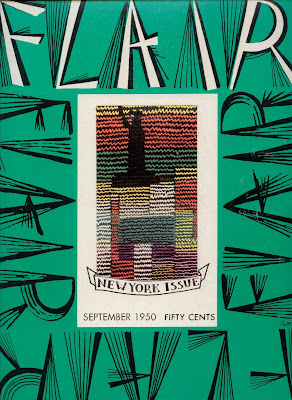 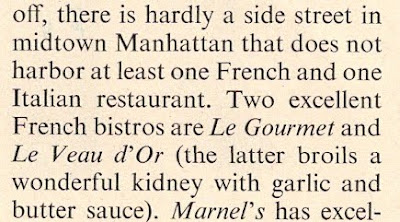 September 1950 issue of Flair, with accompanying article
In a roundabout way, it is one of the last links to the legendary Henri Soulé, whose Le Pavillon restaurant in New York, opened in 1941, stood for years as the standard-bearer in excellence of cuisine, luxury of appointments, impressiveness of patrons, and glacial impenetrability to mere mortals. 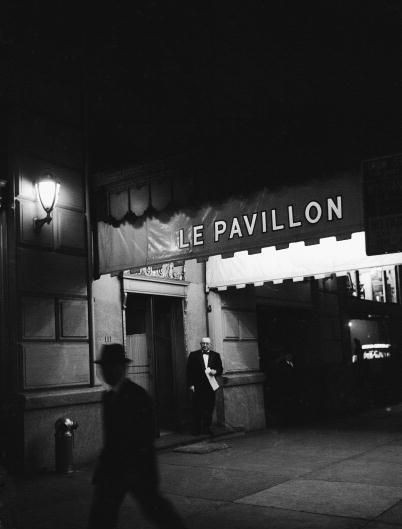 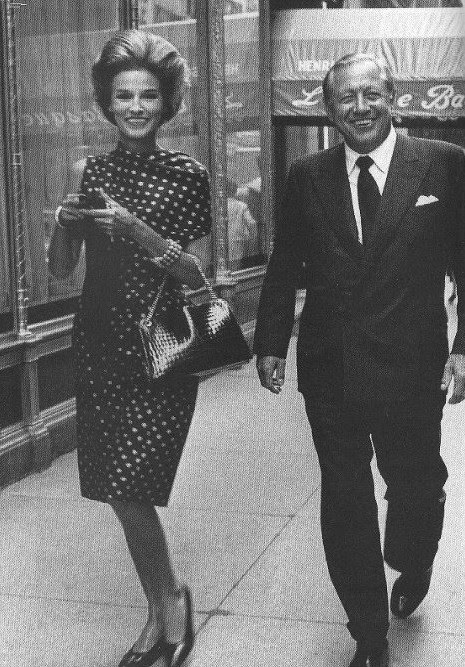 William and Barbara "Babe" Paley leaving La Côte Basque, circa 1970
Only La Grenouille and Le Périgord still survive, the former in a buzzy, eye-popping, refurbished, relatively new space. The food, service and room are all fabulous, but the operation seems too frenzied and self-important to indulge in any nostalgia. The latter, by contrast, is still clinging to life in what seems to be an excruciatingly prolonged last act, complete with dust, cobwebs and corpses (a withered, charred carcass which supposedly once was Duckling a l'Orange). 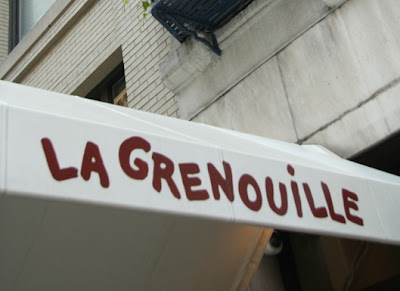 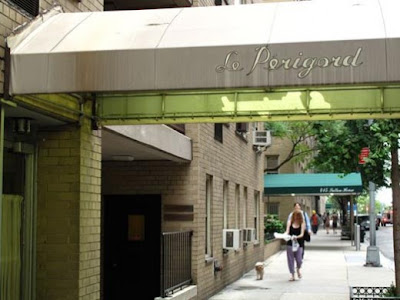 Le Veau d'Or, which Treboux has owned since 1985, was never as expensive or important as those Soulé-inspired temples to haute cuisine; but today, it has all the deliciously faded glamour that La Grenouille has carefully polished and renovated away, and the brisk warmth and energy that completely elude Le Périgord.

Yes, we used the word "energy" to describe the feel of Le Veau d'Or, which would no doubt shock the hipster foodies who, in the wake of Anthony (Kitchen Confidential) Bourdain's televised recommendation, scurried over to 129 E. 60th, only to be left completely baffled by the unhurried pace, sedate clientele, and straightforward, sometimes severe food.

The energy, muted yet still crackling under the surface, is supplied by the proprietor, Monsieur Treboux, who keeps a watchful eye, every night, on the proceedings. He resembles no one so much as a French version of Sam the Eagle from The Muppet Show: tall, dignified, imposing, bald, stone-jawed. Now in the middle of his eighth decade, Monsieur Treboux is alternately grouchy and courtly, but always, always keenly aware of what is happening in his restaurant. His daughter, Catherine, is now also a daily and nightly fixture, acting as hostess, and a charming, ebullient one at that; it's as if they have an act, these two -- Catherine supplying the fizzy yin to her father's gimlet-eyed yang. 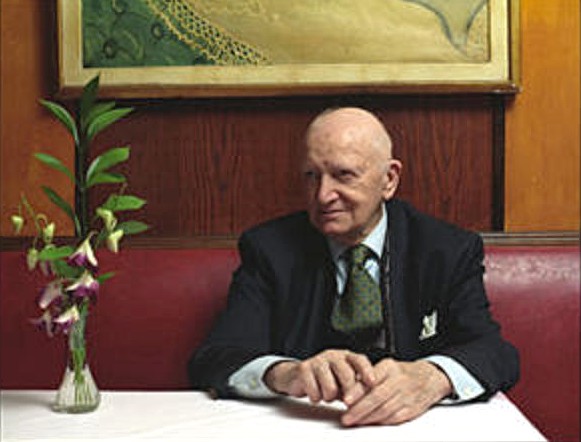 Robert Treboux at Le Veau d'Or
The menu is an old-fashioned table d'hôte, with the price of the entree also including an appetizer and dessert. The coq au vin is absolutely superb, one of the best we've ever had -- it is, truly, a dish we dream about. The kitchen also turns out commendable rognons de veau Dijonnaise (veal kidneys in mustard sauce), and although we haven't personally tried them, the moules marinière (mussels in white wine and cream) were ordered by a young lady at a neighboring table when we last ate there, and she did everything but hold the bowl to her lips and slurp down the last remnants of the broth.

Not surprisingly, given the structure and pricing of the menu, appetizers and desserts are given somewhat less attention. There's a fine cold artichoke, and a very good, surprisingly light rendition of soupe à l'oignon gratinée. The pâté is nicely gamey, but served ice cold. Escargot are passable, but not entirely deserving of the $8 surcharge -- yet when we do break down and order them, we can't help but polish off the pools of the delicious garlic butter with our bread. The desserts are all ready-made and straight from the refrigerator or freezer, yet somehow appealing in their defiant anti-trendiness. Peach Melba is a scoop of store-bought vanilla ice cream topped with raspberry sauce, canned peaches and slivered almonds -- and it was delicious. Similarly, that Floating Island (œufs à la neige, if you want to be properly French) is served suspiciously quickly after one's order is placed, but it's not merely a culinary relic, it's a surprisingly tasty one.

During their glory years, the restaurant's atmosphere truly was charged with palpable excitement: the New York Times' venerable food critic, Craig Claiborne, declared it the one restaurant in town he couldn't live without; in 1962, the Times informed their readers that "In the minds of many Frenchmen and francophiles, Le Veau d'Or is the best French restaurant in town..."; and in 1968, Le Veau d'Or was one of only seven restaurants the Times deemed worthy of four stars. 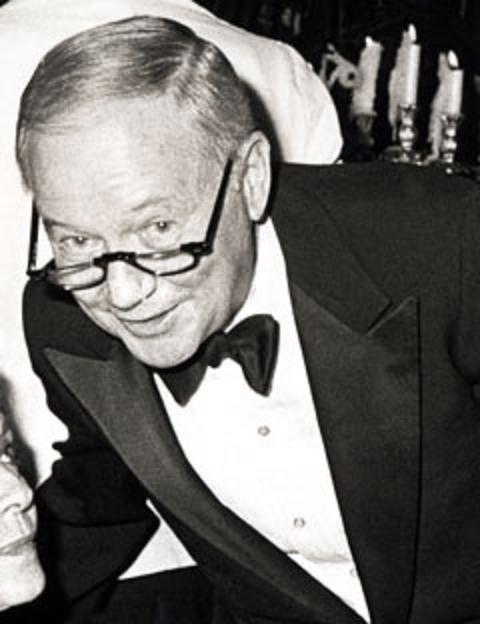 Craig Claiborne
Today, the mood is obviously much less frenetic, and the kitchen perhaps touched less frequently by magic, but if you close your eyes, you can still see the ghosts of a glittering, bygone Gotham seated along the red banquettes, drinking cold martinis and good bottles of Bordeaux. A gruffly efficient, tuxedoed, grey-haired waiter still attends to tables of Park Avenue socialites, French expats, and regulars of all stripes.

As you may have already guessed, we're crazy about Le Veau d'Or, chiefly for its ambiance and our desire to keep a disappearing epoch in Manhattan history alive. The food? Choose wisely, and you can have a superb meal. Choose poorly, and if you're of the correct mindset (i.e., one that would bring you to SSUWAT, where time stands still in 1962, in the first place), you'll still have a good time.

After all, Jackie, Oleg, and Orson all ate here. So did Princess Grace and Bobby Short. Truman Capote passed out once in a booth. And one of the most devastatingly elegant men we know also loved and frequented Le Veau d'Or: our own Mr. Toby Worthington. We were delighted to learn, by sheer coincidence, of Mr. Worthington's affection for Le Veau d'Or, but not necessarily surprised; our tastes converge with Mr. Worthington's in so many areas of importance. And, upon receiving a spectacularly stylish photograph of him "back in the day," leaving Le Veau d'Or with an equally-chic luncheon partner, we felt compelled to re-enact the scene, as it were. 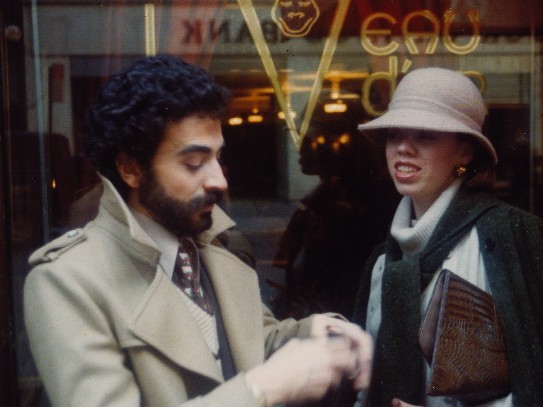 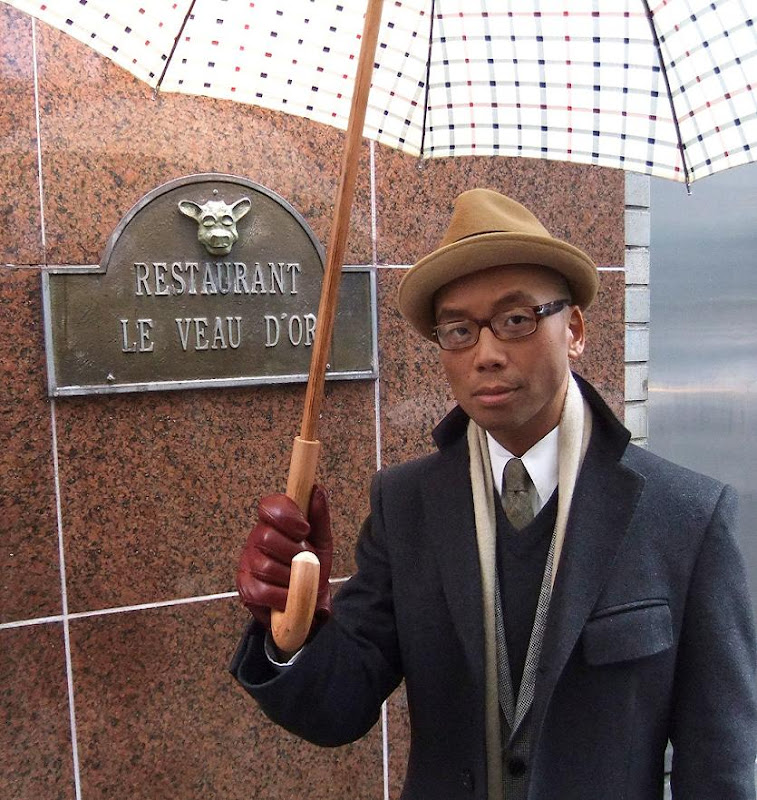 Timeless style: Toby Worthington and friend, 1970's (top); SSUWAT's TJB, February 2011 (bottom)
Le Veau d'Or will likely only continue for as long as Monsieur Treboux is willing and able to preside over each dinner seating -- and then, as he says, "Après moi le déluge." So one evening, if you're eager to sit at the grown ups' table, visit him at Le Veau d'Or. We'll probably be there, too, happy that it's still with us, and sad that once it's gone, a little bit of the Manhattan we never knew, but love so well, dies with it.
Posted by TJB at 12:00 AM